A Tradition of Excellence – 4 Generations Strong

Scott Morris owns and continues to operate the printing business started by his maternal grandfather, Fred Carlson. Fred, a manager of the Hub Printing Company, purchased the business in 1933. It was originally located on East 22nd Street in Kearney.

Eventually, Scott's father, Harold Morris, began managing the business. In 1956, Harold bought out Webert Printing, and the business moved to the Webert Building at 2305 Central Avenue. In 1972, office supplies and furniture were added to the product line. In 1975, the company incorporated, and its name was changed to Morris Press & Office Supplies, Inc. Following the death of Harold Morris in 1976, Scott became president of Morris Press. Under the leadership of Scott Morris, the company would begin to greatly change.

In the late 70s, commercial printing grew at a rapid rate due to a strong farm economy, until a recession hit in the early 80s. Recognizing the need for a broader sales base beyond the local market, Morris Press began a cookbook publishing division.

In 1988, the decision was made to build a sales and production facility to meet the space requirements of the fast growing cookbook division. In May 1989, Morris Press Cookbooks moved to its present location at 3212 East Highway 30.

In 1994, the company expanded into the short-run book printing market with yet another new division, Morris Publishing®. That same year, the company also broke into the education market with School Mate®, a division which produces student planners, school folders, and fundraising products for the K-12 school market. Both divisions continue to grow and develop new products.

With solid growth in all divisions, office supplies were slowly phased out. In 2001, the corporate name was changed from Morris Press & Office Supplies, Inc. to Morris Printing Group, Inc. The change was made to convey a new company image for the four divisions.

Today, Scott Morris' son, Ryan, works alongside his father, taking the tradition of excellence in printing into the fourth generation.

Morris Press has been a mainstay in the Kearney business community since 1933. Our sales office, conveniently located in historic downtown Kearney, has a knowledgeable team of professionals ready to serve you.

We have a long-standing tradition of personal service, and our goals are the same as they were years ago: customer satisfaction, quality printing, and outstanding service 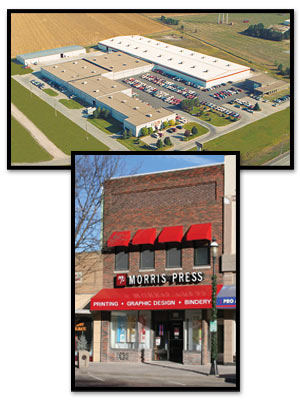 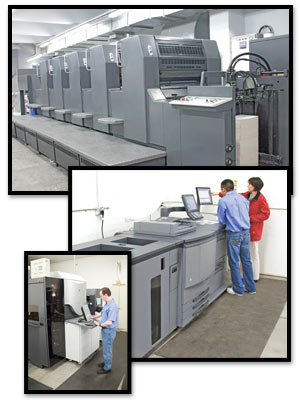 Morris Press has kept pace with the latest in printing technology. A total of 6 plant expansions have increased our production facility to over 250,000 square feet. It houses the most advanced equipment, including 9 digital one-color presses (web and sheet fed), 2 digital full-color presses (sheet fed), and direct-to-plate technology for all our traditional presses. Millions have been invested to provide quality, efficiency, fast turnaround, and affordability to our customers.

The result is many benefits to the company's customer base. Due to the large volume of printing among the four divisions, paper and other material is purchased in mass quantities, allowing savings to be passed on to customers. Morris Printing Group, Inc. uses advanced printing technology to maintain a competitive edge in products and pricing. Still, the employees of Morris Printing Group, Inc. are the company's greatest asset. They exemplify qualities the Midwest is known for: honesty, hard work, and a job well done

With the newest technology and our skilled sales and production staff, we are prepared to meet your most demanding printing needs. Our clients have found our progressive solutions and expertise to be a tremendous asset to their businesses.

Back to the top of the page